”Brazilian Jiu-Jitsu became a lifeline for me and a way to put my focus into something productive, safe, and healthy.” 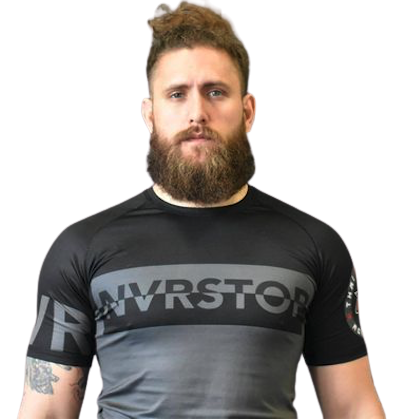 How I got into Brazilian Jiu-Jitsu

At the age of 4, I was training Uechi Ryu with my dad. This led me to practice several other martial arts including wrestling until I got into Team sports. When I was in high school I injured myself badly, taking me out of my career path in football.

When I figured I couldn’t do football anymore I decided to take up Kickboxing where I knew I could punch and kick people, something I already had some practice in. My friend, Kevin, with who I was training Shotokan Karate and Kickboxing with had also started training Brazilian Jiu-Jitsu and introduced me.

After the first time we rolled, for 2 hours, on a tiny blue gym mat I told him I would probably end up doing this for the rest of my life. It really brought me back to the wrestling my cousins and I used to do for hours at a time, it was so much fun. Our group of training partners expanded and we eventually got a gym going to train Brazilian Jiu-Jitsu and Muay Thai. I ended up meeting George St. Pierre, who’s career I’d been watching since TKO.

This encounter with George St. Pierre really inspired me to pursue MMA more seriously. I got into Boxing, and we brought in Canada’s only Rickson Gracie black belt Shane Rice to teach us Brazilian Jiu Jitsu. I trained under Shane for about 5 years before moving on to Fit Plus MMA with my best friend. At Fit Plus MMA I trained under Scott MacLean and trained with TJ Grant (UFC) and this is where I trained like it was a job. My life revolved around training.

Eventually, the financial burden of training became irreconcilable and I had to switch back to my old gym, Clinch. I was trying to find more affordable MMA focused training and started training at Bushido Kai in Halifax supplemented with Titans for open rolls, and Abhaya MMA. I was trying to find fights and get into Professional MMA but after three opponents pulled out of three different fight cards I decided to put my focus into Brazilian Jiu-Jitsu. By then I was back training under Shane Rice.

I then moved to Ottawa and got a job teaching Brazilian Jiu Jitsu. From there I moved to Italy and trained at Milanimal where I got to train with their incredible competitive team to win competitions, as well as with the Mendes Brothers (AOJ). I then moved to New York and trained under Marcelo Garcia at his academy, training closely with Dominyka Obelenyte (youngest world champion).

When I got back to Ottawa I began teaching again briefly before moving to Montreal where I taught and trained at Carlson Gracie Montreal. While in Montreal I also studied and trained some circus arts with Yury Bozyan.

After a few years, I came back to Ottawa, teaching full time at three different schools and building my program. After a year I started building up a new program for a Thai Boxing Academy which was so successful it led me to open Ottawa Jiu-Jitsu.

Growing up in Woodbine Trailer Park which is for lack of a better term, the hood, Brazilian Jiu-Jitsu gave me a way to stay out of the trouble my friends and family were getting into. Choices were limited and Brazilian Jiu-Jitsu became a lifeline for me and a way to put my focus into something productive, safe, and healthy.

This path was not linear and required me to learn from mistakes along the way but having Brazilian Jiu-Jitsu always gave me a path I could count on to help me learn, and make better choices. I’ve worked out my feelings, learned about myself and continue to do so with my practice on the mats.

Even my best friends I grew up with who are still there today do Jiu-Jitsu. I’ve made human connections, built long-term friendships and become part of a community of people dedicated to health and self-betterment in some way shape or form that I wouldn’t otherwise have.